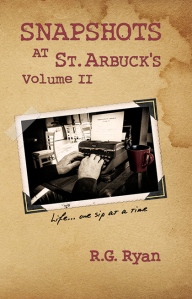 “You think you’ll ever grow your hair out again?”
The question came from Eddie, my disgustingly good-looking, African-American best friend as we sat on the patio of St. Arbuck’s enjoying coffee and conversation.
I said, “Assuming I had hair to grow, why would I want to? I mean, look at that guy.” I gestured toward a young man whose highly coiffed hair fought valiantly to stay in place against the wind. “You don’t see me having issues like that.”
Eddie glanced at the young man and said, “No, and neither do I. Truth is, I don’t miss the hair at all.”
“Not even the attention you used to get because of the dreads?”
“Well, there is that,” he said with a sigh. “You gotta admit your boy had some illin’ dreads.”
“Illin’,” I said quizzically.
“Yeah, you know, sick.”
“Sick as in, bad or good?”
“Bad, as in good.”
Squeezing my eyes shut tightly, I massaged the bridge of my nose and said, “You know, it’s getting really difficult to keep pace with the constantly changing landscape of your vocabulary.”
“Nothin wrong with my vocabulary,” he said defensively as a St. Bernard puppy drug his owner across the patio in pursuit of a carelessly discarded piece of pastry. The puppy had to be at least ninety or a hundred pounds.
“I didn’t say you had a poor vocabulary, quite the contrary. It’s just that your verbiage is altered in cadence and style so often I find myself quite frequently adrift and struggling to comprehend.”
He wrinkled his brow and said, “What the heck did you just say?”
I started to respond only to be interrupted by the dog owner, a rather petite fifty-something woman saying loudly, “Arlo! Come on! Come on, Arlo. The man doesn’t want his face licked.” as Arlo showered a man at a nearby table with a full compliment of doggy affection.
To the man’s obvious chagrin, I might add.
I said to Eddie, “What was the question?”
“I asked you what you just said to me.”
“Oh, that. Well, I was trying to explain that you change your speech patterns and word selection a lot, to the extent that I find it somewhat difficult to know what you mean in any given situation. Is that better?”
He cocked one eyebrow and said, “A little. I mean, dude, if you want to talk about someone’s word choices…” he didn’t finish the sentence, but merely gestured dramatically in my direction.
“What?” I said.
“You know what.”
“No, I don’t. If I did, I wouldn’t have asked for an explanation.”
“All right,” he said leaning forward in his chair. “It’s that going around the barn thing I talked to you about before. You just have a way of expressing yourself that’s different from most folk.”
“And this is a problem?”
“No…yes, I mean, mostly it’s not, but sometimes you’ll speak an entire sentence and I won’t have the slightest idea what you’ve just said.”
“Well, welcome to my world!” I said emphatically.
“Look, just because I choose to use the language of my people at various times and in various ways, that doesn’t mean I’m a poor communicator.”
“The language of ‘your people?'”
“That’s right! The language of my people.”
I said, “You grew up in an affluent family in a house three blocks from the ocean. Your people, if indeed they could be called that, were mainly surfers!”
“That’s right. Why you think I say ‘dude’ so much?”
Arlo, the St. Bernard puppy, chose that moment to try to get frisky with a Jack Russell Terrier who had just come onto the patio with its owner. Apparently the Terrier wasn’t in the mood and growled ferociously at Arlo giving him a nip on his hindquarters which sent the poor pup scurrying behind the protection of his owner.
I said, “I’m not sure why we’re even having this conversation.”
“It’s because you bein’ obtuse,” he said smugly.
“Obtuse? Do you even know what that means?”
Looking upward and to the left he said, “I believe it means insensitive and imperceptive. Purposely so.”
“Yeah,” I said, “and also lacking intelligence!”
He smiled and said, “I’m down with that.”
The store manager wandered by and said, “You two fighting again?”
Eddie and I glanced at each other and said, “No!” simultaneously.
She did a, “wink, wink, nudge, nudge,” motion with her elbow and walked away.
“We be fightin’,” Eddie said, “she’d know it!”
“Everyone would know it!”
“You got that right.”
The Jack Russell trotted over to Arlo, sniffed around his doggie parts and then licked him on the nose.
I said, “Looks like the start of a beautiful friendship.”
“I ain’t lickin’ your nose and that’s that!” Eddie said.
“Promise?”